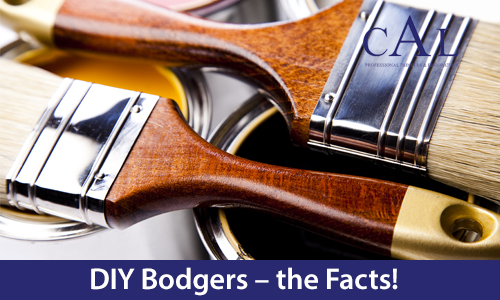 Take a look at these facts:

•    Britons spend £244 a year per head correcting DIY disasters adding up to a staggering £6 billion for the nation annually
•    There are currently 31.7 million unfinished DIY jobs in the UK
•    One in ten Britons has injured themselves carrying out DIY jobs

These are some of the conclusions from a survey of 2,000 households carried out by Armstead Trade, a professional paint brand.

The study found that 67% of home owners now avoid basic decorating with one in ten worried that they will repeat a past bodge and 16% admitting to feeling stressed about carrying out DIY projects.  Some 36% of those interviewed confessed they did not have the required skills to do decorating jobs and 12% of men reported their partner did not trust them to do it successfully.

So what are the jobs that go so wrong?  Painting walls and ceilings top the list (32%) followed by hanging wallpaper (15%), putting flat pack furniture together (14%) and putting up shelves (12%).  A fifth of those surveyed admitted ruining carpets or furniture by spilling paint on them and some confessed to spilling paint on pets (4%) and even children (1%).

12% have drilled a hole too big for the task, 7% used the wrong paint entirely (eg gloss instead of emulsion) and 6% have watched as their shelves have fallen down.  In desperation, 7% of men have hired a professional to do the job whilst claiming the credit for doing it themselves.