Barry Bucknell and the Birth of DIY! 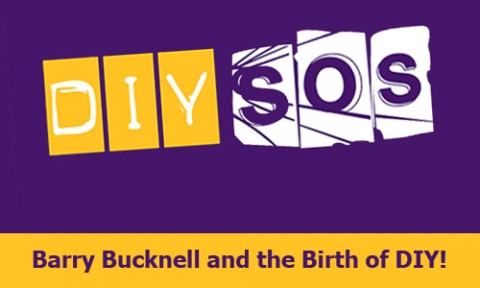 I don’t know if you watch those DIY programmes on television such as BBC’s Changing Rooms and DIY SOS: The Big Build. I was interested when I stumbled across an article about the father of television DIY, Barry Bucknell.

Barry first appeared on television in 1956 on the BBC’s About the Home. With a friendly, humorous style, he introduced people to the art of putting up shelves amongst other things. Women, many of whom had grown used to doing what were traditionally thought of as ‘men’s jobs’ during the war years, responded enthusiastically. Men pretended they knew how to do it all along, whilst feverishly making mental notes of Bucknell’s techniques.

By the late 1950s he had graduated to fronting the BBC’s long running Barry Bucknell’s Do It Yourself, which drew some seven million viewers at its peak. In those days, most programmes were shown live as they happened in the studio, and Barry’s was no exception. This led to him rehearsing his projects at home while his wife timed him. Needless to say there were occasions when things did not run according to plan in the studio. One of his catchphrases thus became “This is how not to do it”!

One infamous incident had him over-soaking some ceiling paper which subsequently dropped onto his head – and they say panto is dead.

One of the ideas that Barry popularised was the boarding over of period style doors and fireplaces with cheap materials, such as chipboard. By the 1990s people were desperately ripping these off and restoring the original features.

In 1962 he developed a series of 39 programmes for the BBC entitled Bucknell’s House. The project involved the complete renovation of a house in Ealing that had been bought for £2,250. When it featured in the C4 programme How TV Changed Britain in 2008, the house was estimated to be worth around £800,000.

Barry may have hung up his paintbrush but I am available to carry out all your decorating jobs in a professional manner. Feel free to give me a call on 01452 540067 or 07765 881767 or have a look around our website for some idea of what I can do.